In February 2007, Dr Michael Murphy became President of University College Cork.Dr Murphy, who is a graduate of UCC's Medical School, was appointed Professor of Clinical Pharmacology and Head of the Department of Pharmacology and Therapeutics at UCC in 1992. He became Dean of the Faculty of Medicine and Health in 2000 and Head of the College of Medicine and Health in 2006. During this period he managed a programme of expansion and diversification, increasing the number of professional degree programmes from two (Medicine and Dentistry) to six (Nursing, Pharmacy, Speech Therapy and Occupational therapy), which now provides education, training and research opportunities for almost 3,000 students. The associated capital investment programme, the largest since the foundation of the faculty in 1845, exceeds 120 million.Dr Murphy previously held senior positions at the University of Chicago and at the Royal Postgraduate Medical School London, and worked at St Vincent's University Hospital Dublin and St Finbarr's Hospital Cork.Dr Murphy's external leadership roles have included membership of many international and domestic professional organisations, including government and industrial advisory panels.  His board membership has included the Irish Health Service Executive and the Health Research Board of Ireland. Dr Murphy has published extensively, with over 100 original publications on therapeutic strategies for cardiovascular risk factors and disease.  He has led several large-scale international research projects and clinical trials, and has been widely cited in the literature of medical research.He is married to Siobán and has three children.

My research interests have focussed on the basic and clinical pharmacology of drugs acting on the cardiovascular system, particularly in the management of risk factors for cardiovascular disease. I have occasionally strayed into the measurement and prevalence of these factors in various populations. My outputs in this regard are best detailed through a record of funding acquired and of publications arising from the work.‍ 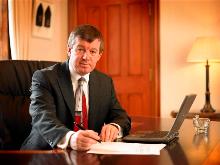