Fred Powell, B.Sc(Soc), M.A., M.Soc.Sc., Ph.D, served as Head of the School of Applied Social Studies at University College, Cork, from 1989-2014.  He was appointed Dean of Social Science at UCC from 2008-2014.  Born in Dublin, he holds degrees from Trinity College, Dublin, the University of Edinburgh and University College Dublin.  Previously he lectured at the University of Ulster.  He has been an Instructor on the Extension Programme of the University of California, San Diego, and has lectured in the UK, Italy, Portugal, China and France.   He is Chair of the Board of the M.Plan and Chair of the PRTLI4-funded Institute for Social Sciences in the 21st Century (ISS21) at UCC.  He also served as Chair of the MBS in Asian Business, a joint venture between UCC, NTU Singapore and the Farmleigh Fellowship, from 2010-2013, and currently chairs the USREP Committee and is UCC's representative on the Irish University Association's Committee on Community Engagement.

My research during the past decade has been diverse but thematically interconnected. A significant part of the work is theoretical and addressed to an international audience but counter-balanced by a distinctly Irish focus, which is empirically-based. The overarching theme has been the exploration of civil society and a socially-inclusive view of citizenship from a variety of perspectives, both social, political and philosophical.

Civil society as a concept gives coherence to the diversity of welfare as an activity within the social world, differentiating it from both market and government: civil society occupies a space - the third space - between them in the social order. But this must be described as a `public space' shared with the State with which civil society has both a symbiotic and conflictual relationship. The idea of civil society is based upon citizen participation (active citizenship) in an inclusive community and a political culture that promotes civic engagement in public welfare - i.e. participative democracy.

Childhood and Youth have become a central focus for my research aided by grants from the Council of Europe and the Irish Research Council.  I have adopted a two-fold approach: (1) mapping youth policy and provision in Ireland and its volunteer base and; (2) seeking to interrogate why poor children have historically become so estranged from Irish society.  My work challenges middle-class notions of childhood as a protected social space, 'the sacred garden of childhood' - with the evidence of the historic abuse of children.

I am the Principal Investigator and Chair of the Management Board of the Institute for Social Science in the 21st Century, which is grant-aided (Euros 919,000) by the HEA PRTLI4 programme. ISS21 has helped to bring together a disparate social science community at UCC. The guiding philosophy is to build a research infrastructure in the social sciences through a national collaborative framework, known as the Irish Social Science Platform (ISSP). I chair its sustainable communities strand. The role of ISS21 is discussed in detail in the School's general research strategy statement. In summary, it has two core elements that devolve on the Institute of Social Science for the 21st Century (ISS21). This initiative has been important in itself but also in terms of the profile of the social sciences within UCC. We have over the past two years become a significant force within UCC's research agenda. My goal is to work with colleagues across UCC to further develop the profile of the social sciences and support my colleagues within the social science community to realise their full potential. 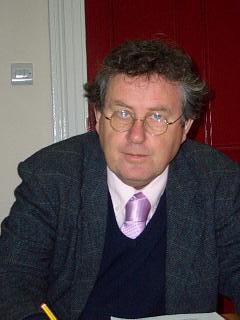