After two years of preparatory classes to ENS and a B.A. in English (1992), I wrote an M.A. thesis on Women's Roles in British Comedies 1880-1930. I spent a year in Oxford as a French assistant, engaging in theatre performances at the Maison Française d'Oxford. I then completed a M.Phil in Drama, 'Silencing & Licensing: the censorship of Shaw's The Shewing-Up of Blanco Posnet' (1995) at the University of Orléans, before embarking on a Ph.D devoted to theatre censorship: 'In the Wings of the Lord Chamberlain's Office: Theatre Censorship 1900-1968'.‍

My research focuses on 20th-century British drama. My interests include theatre censorship and dramatic literature from the 1950s onwards, in particular the theatre of Arnold Wesker. The issues call for an inter-disciplinary approach (literary and historical) and my work therefore involves a reflection on the political as well as cultural context. My first research field was devoted to the issue of theatre censorship. I have published extensive articles on the topic in England and abroad (see publications). The latest archival findings are explored in the co-authored volume Theatre Censorship: from Walpole to Wilson (OUP, 2007). Accounts of theatre censorship in England have so far focused on the activities of the Lord Chamberlain and his Readers, and the impact of censorship on the work of individual playwrights. In contrast, the history of censorship legislation has been neglected. Through its extensive investigation of political and personal archives, supplemented by a questionnaire survey and telephone and face-to-face interviews which I led, this volume offers a completely new perspective on English cultural history. My research has enabled me to trace the hidden alliances and compacts that helped to prevent the abolition of theatre censorship so that successive Governments during the twentieth century might be assured of a politically docile stage.  In addition, are documented the regular private consultations between successive Lords Chamberlain and different Government ministers, which ensured that political censorship could be exercised without any public awareness of the fact. Despite objections from the Queen, and opposition from Harold Wilson (which had resulted in Roy Jenkins, the Home Secretary, making resignation threats), theatre censorship was finally abolished in 1968 when a new statute was enacted giving the stage the same freedom under the law as any other form of artistic expression.
By setting this in its political and historical context, this work represents an important resource for future generations of scholars. This research has further strengthened my expertise in 20th-century theatre censorship and given me a training in interdisciplinary approach which is proving invaluable for my research of Arnold Wesker. In my interviews with surviving politicians and playwrights, there were compelling moments of insight and explanation, and my published work on censorship is making use of this interdisciplinary methodology which defines my work on English theatre. My research on censorship led me to meet Arnold Wesker, which initiated my second field of research.

I am currently investigating the career of Arnold Wesker within the context of British theatre since the 1960s. Having initially published literary and biographical articles on his work, I was awarded a Fellowship by the Harry Ransom Center, University of Austin, Texas, to research the Wesker archives. I have written/am writing three more articles and a journal issue on redefining his impact on stage and in cultural terms, and am currently concentrating on a book project concerned with original insights into his less known work.  In June 2014, I co-organised, with Professor Thierry Dubost (University of Caen), an international conference on contemporary Irish theatre, 'Populating the Irish Stage'. http://populatingtheirishstage.wordpress.com/The preparation for a 3-day event which gathered together academics and artists led me to familiarise myself with the reality of contemporary Irish theatre practitioners and to a great number of performances. The conference has thus opened a third area of research, which is focusing on site-specific theatre in contemporary Ireland and on theatre companies in Cork.     I have read for the Irish Journal of French Studies, Etudes Irlandaises, Irish Studies, and Routledge. 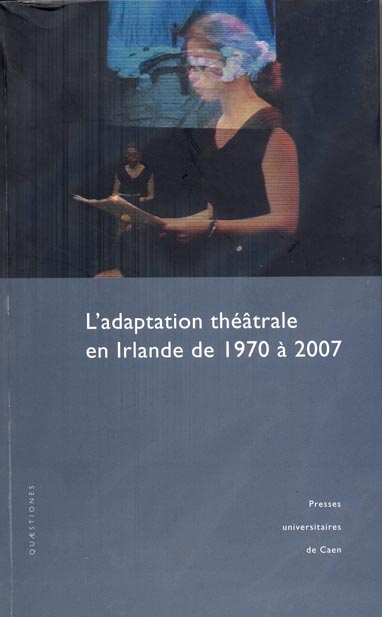