Professor Grace Neville is Emeritus Professor in the French Department, University College Cork (National University of Ireland), having retired from UCC in 2012 after a career of c. 35 years as lecturer in French literature and language.  From 2006-08, she was also Head of the Dept of French; from 2008-12 she was Vice-President for Teaching and Learning, and Director of NAIRTL (the National Academy for the Integration of Research, Teaching and Learning). She was an elected member of the UCC Governing Body for several terms. She has held numerous visiting professor posts, including the post of Visiting Academic at Boston College, USA, of Professeure invitée at the Université de Rennes 2 and of Research Fellow at the Centre Culturel Irlandais / Irish College, Paris. in 2013, she was awarded an adjunct professorship of French at UCD. Since 2012,  she has been invited to speak on various aspects of higher education by the ministries of education in the Czech Republic, Tunisia, Saudi Arabia and France. A native of Cork city, Grace was awarded the Honan Scholarship and an Entrance Scholarship to UCC where she studied French and Irish under Professor Kathleen O'Flaherty and an tOllamh Seán Ó Tuama respectively. After graduating with a double first class honours degree in French and Irish, Grace won the French Government scholarship to l'Université de Caen for the academic year, 1972-73. She later taught at l'Université de Lille and l'Université de Metz. She was awarded her doctorate on comparative French and Irish literature by l'Université de Lille ('mention très bien avec les félicitations unanimes du jury'; supervisors: Prof. Patrick Rafroidi, President of l'Université de Lille 3 and Prof. Sean O Tuama, UCC). Grace has published on Franco-Irish relations from the medieval to the modern period, on language issues and on women's writings. She has published and edited a number books and has presented over 230 research papers at venues including the Sorbonne, the Collège de France, the French Senate (Palais du Luxembourg), Harvard and Berkeley. She has been involved in making a number of TV documentaries with RTÉ and the BBC, and is a frequent interviewee on Raidio na Gaeltachta.. During her career at UCC, she served on numerous UCC committees. She served for many years on the board of directors of the Glucksman Gallery and was Chair of Cork University Press publishing committee, and Chair of the UCC Board of Women's Studies. She was and remains active in the local community, serving for many years on the board of management of two local secondary schools, and as a Director of the Presentation Brothers Schools Trust, as well as working as a member of the Cork-Rennes twinning committee at the Cork City Hall.She has been involved in Teaching and Learning initiatives since the early 1980s, from the UCC Teaching Development Unit to more recent initiatives inspired by the Teaching and Learning Scholarship at Harvard and the Carnegie Foundation for the Advancement of Teaching. In 2002, she was one of the first recipients of the President's Awards for Excellence in Teaching at UCC.  As Vice President for Teaching and Learning, she had particular responsibility for Ionad Bairre, the Centre for the Support of Teaching and Learning in UCC and was a member of the teaching/organizing team of the Certificate, Diploma and Masters in Teaching and Learning, as well as the university-wide postgraduate module in Teaching and Learning. Until her retirement in 2012, she was Director of NAIRTL, the National Academy for Integration of Research, Teaching and Learning as well as overseeing the operation of UCC's Centre for Adult Continuing Education.
In France, over the past decade she has been an invited member of the international jury of the IDEX/ I-SITE initiative (a major part of the French government's Investissements d'avenir programme) at the ANR / Agence Nationale de la Recherche, Paris. In October 2014, she was appointed as Chair of the Strategic Planning Committee of Sorbonne-Université, Paris (a multi-institution cluster which includes Paris-Sorbonne Université, l'Université Pierre et Marie Curie, l'Université de Technologie de Compiègne, INSEAD, le Muséum National d'Histoire Naturelle, le CNRS, INSERM and IRD). She is an invited member of the International Scientific Advisory Board and main board of le CRI / Centre de Recherche Interdisciplinaire, Paris. Since 2012, she has been frequently invited as evaluator, guest speaker and collaborator by various French state bodies including the Ministère de l'Education Nationale, Paris, the French National Research Agency (l'ANR - l'Agence Nationale de la Recherche, Paris), Sorbonne-Université, Paris andthe CPU / Conférence des Présidents d'Université. She has been an invited evaluator for the European Commisssion, the AERES (Agence de l'Evaluation de la Recherche et de l'Enseignement Supérieur), the HCERES (Haut Conseil de l'Evaluation de l'Enseignement Supérieur et de la Recherche), Paris, and the EUA (European University Association, Brussels). In 2012, she was appointed Chair of a French national initiative on innovative teaching in French higher education at the Ministère de l'Enseignement Supérieur et de la Recherche, Paris (the IDEFI initiative, budget c.180 million euro), and in 2015 was appointed Chair of an initiative on innovative technology in French higher education at the Ministère de l'Enseignement Supérieur et de la Recherche, Paris (the IDEFI-N initiative, budget 12.3 million euro). Both of these initiatives are part of the French government's Investissements d'avenir programme. In 2019, she was appointed to the Comité d'Orientation Stratégique of l'Université de Rennes 1, and to the audit committee of l'Université Cergy-Pontoise/ Université de Paris-Seine.She was awarded the highest distinction bestowed by the French state, the Légion d'Honneur (promotion 14 July 2015) as well as the Palmes Académiques, and is honorary secretary of the Irish Board of the Légion d'Honneur (French Embassy, Dublin), as well as President of AMOPA Irlande (the Irish branch of l'Association des Membres de l'Ordre des Palmes Académiques (French Embassy, Dublin). She has been an invited judge for various literature and history publication awards, including the Elias Fellowship jury and the ACIS Donal Murphy book prize. ‍ 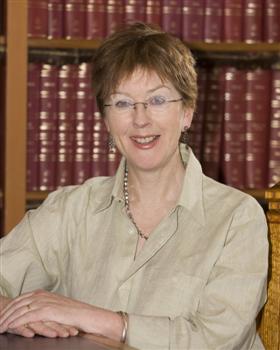