Dr Seán Lucey is the Research Manager in the College of Business and Law. He is responsible for supporting the management and development of research activity across the College, especially in the Cork University Business School and School of Law.

He has an extensive academic background in medical humanities and history and has held teaching and research positions in the University of Liverpool, Queen’s University Belfast, Trinity College Dublin, University College Dublin and Oxford Brookes University. Much of this work has been in multi-disciplinary contexts in history departments, medical schools, and public health units. Dr Lucey also has a track record of successfully competing for research funding and has received grants from Irish and British funding agencies including the Irish Research Council, Royal Irish Academy, British Academy and the Northern Ireland Executive. He has also worked on wider research projects funded by the Arts and Humanities Research Council (UK), Economics and Social Research Council (UK), and Wellcome Trust. Dr Lucey has also published numerous monographs, essay collections, and journal articles with leading international publishers.

He has a teaching and research background in the history of public health, comparative and regional health systems, health inequalities and residential/institutional welfare and care. His work has a wide geographical scope and concentrates on developments in Ireland -- both north and south -- and Great Britain.

In 2015 Manchester University Press published his second monograph which explored welfare and healthcare reform in inter-war Ireland. Also in 2015, Dr Lucey co-edited a collection of essays which explores healthcare in comparative and regional settings in Britain and Ireland from 1850 -- this was published by the Institute of Historical Research, London. He is currently writing a new monograph which examines public health in twentieth-century Northern Ireland and Belfast which is under contract with Manchester University Press.

Previously, he was a Research Fellow on the Arts and Humanities Research Council funded project 'Poverty and Public Health in Belfast and the North of Ireland' and also held an Irish Research Council Fellowship (two years) in the Centre for Contemporary Irish History, Trinity College Dublin. The project explored attempts during the 1920s and 1930s of the newly established Irish Free State at reform of the poor law and workhouse system.

He also worked as an Economic and Social Research Council (E.S.R.C) Postdoctoral Associate on the ‘Irish welfare regimes under the Irish Poor Law, 1850-1921’ at Oxford Brookes University. This project explored the workhouse and outdoor relief system in Ireland. Other previous research positions were held in the Centre for the History of Medicine, University College Dublin and the Centre for the History of Nursing and Midwifery, University College Dublin. He was also an adjunct lecturer in medical humanities in the Trinity College Dublin's School of Medicine.‍ 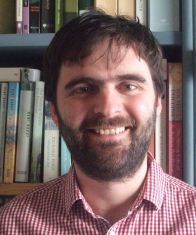