Mary Cronin is a Social Scientist and College Lecturer in the School of Public Health (SPH), UCC since 2006, working on a half-time basis.  She is the lead academic for teaching in the discipline of Health Promotion and makes a unique contribution to breadth of research in the SPH through her work on the social determinants of the health inequities experienced by the Traveller community in Ireland.
Mary lectured in the Department of Health Promotion, NUI Galway from 2002-2004 and was an Outreach Co-ordinator, Placement Co-ordinator and Lecturer in the Department of Applied Social Studies, UCC on the BSc Youth and Community Work team from 1998-2002.

Mary brings an inter-disciplinary perspective to her research and teaching in Health Promotion based on her academic and professional qualifications and 15 years of professional experience.  She's undertaking her PhD in the discipline of Social Policy in which she has an MA from UCC. She was awarded a Diploma in Community and Youth Work from NUI Maynooth and has two nursing qualifications - Registered Sick Children's Nurse from Guy's Hospital, London and a Registered General Nurse from the Cork Regional Hospital.
Mary worked in Community Development with the Traveller community and in the Mahon area of Cork city, as well as gaining experience on Dublin's south inner city in a drug users rehabilitation programme and a community youth project; she maintains a strong network of contacts with practitioner colleagues.
She worked as a nurse in Ireland, England and Australia, as well as in Liberia and Somalia in Africa, where she managed emergency vaccination and food supplementation programmes during periods of conflict.

As Health Promotion teaching lead Mary teaches/co-ordinates under and post-graduate modules addressing Health Promotion, Promoting Health with Communities, Social Policy and Health, Health Inequities, Culture, Ethnicity and Health, and Qualitative and Participatory Research.
At UCC she has supervised 14 Masters dissertations, co-supervised two PhD theses and is committed to supporting community-engaged research among the SPH student body.  She's a member of the SPH PhD Review Group and its Civic and Community Engagement Committee.

Mary has been a College of Medicine and Health nominee to UCC's Civic and Community Engagement committee since 2018; she was an active member of the Alcohol and Substance Abuse Working Group of UCC's 'Health Matters' health promotion initiative from 2012-2017.

Mary's research is focused on examining health determinants, particularly structural determinants, to better contribute to social transformation and the amelioration of inequities in Ireland, focusing on the Traveller community, as well as other minority communities. She has a strong interest in participatory and engaged research and its potential to address epistemic injustices experienced by those on the margins of society and to influence public discourse, policy making and health services.

Research Subject Areas
Methodologies / Methods
Mary is a Project Partner with Professor Fergus Shanahan and colleagues in the APC Microbiome Ireland, UCC, on a Science Foundation Ireland funded 'Redefining STEM' project (2020-2022), in partnership with the Traveller Visibility Group.  This project employs participatory methods to engage Travellers in disseminating new knowledge on the Traveller microbiome and developing a future research programme with the community.

Mary is a member of the Inclusion Health Research Group in the College of Medicine and Health, UCC and a member of the inter-disciplinary SHAPE (Society, Health and Political Economy) cluster of ISS21 (institute for Social Science 21) in UCC.

Mary was the academic lead on a Community Based Participatory Research project in partnership with the Southern Traveller Health Network (STHN) and two Health Service Executive (HSE) South departments, from 2013-16.

Since 2013 she has facilitated five Community groups to undertake research projects of their choice, through co-designing and directing studies through her supervision of MPH student research projects.

I am the discipline lead for Health Promotion in the SPH.  My teaching focuses on Health Promotion's  core concepts and principles, along with a critical analysis of preceding public health discourse, theories and practices. I place particular focus on the Social Determinants of Health and the root causes of Health Inequities and the actions needed to reduce them.  I teach on Public Policy, Health Discourse and Community Development as means to ameliorate Health Inequities, as well as Qualitative Critical Social Research and Participatory, Community and Civic Engagement in Research.
I also teach on the topics of Ethnicity, Culture and Health and Anti-Racist Practice.  ‍ 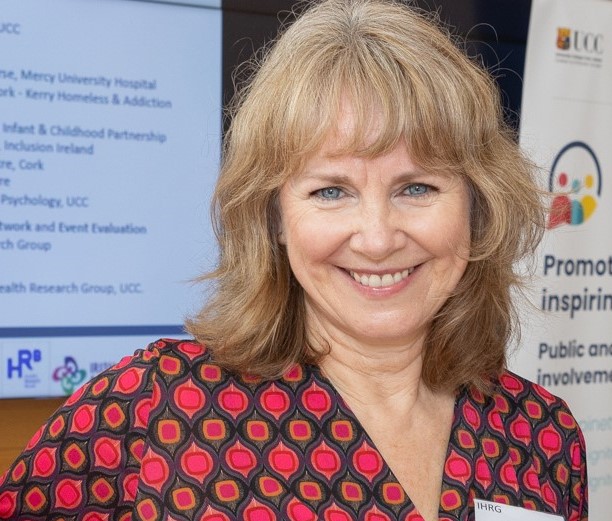