Christian Waeber joined University College Cork (UCC) in 2013; he is Professor of Pharmacology, a joint appointment between the School of Pharmacy and the Department of Pharmacology. He is currently Head of the Department of Pharmacology and Therapeutics.Early in his career, Christian worked as a Ph.D. student at Novartis Basel, where he characterized the pharmacological profile, signalling pathways and brain distribution of 5-HT1D receptors. Christian then joined as a post-doctoral fellow the laboratory of Joel Bockaert, at the “Centre CNRS-INSERM de Pharmacologie-Endocrinologie” in Montpellier. In 1993, he joined Harvard Medical School to characterize the pharmacological profile of 5-HT1-like receptors inhibiting neurogenic inflammation, a research carried out in collaboration with Michael Moskowitz. Their work led to the suggestion that specific 5-HT1F receptor agonists would be effective acute antimigraine agents devoid of cardiovascular side-effects. The recent approval of Lasmiditan proved this notion to be correct.Over the last 20 years, Christian has moved away from 5-HT to focus on the role of sphingosine-1-phosphate (S1P) receptors in various pathophysiological processes. His studies on blood vessels are significant for the treatment of cerebrovascular disorders (e.g. stroke, vasospasm), and conditions such as diabetes, atherosclerosis, pulmonary hypertension or cancer. Christian’s team has also shown that S1P receptors have a widespread distribution both in adult and developing brain. They have characterized the CNS distribution of the S1P synthesizing enzyme, sphingosine kinase (SK), showing that it is up-regulated in neurons following ischemia. Finally, they have shown that stimulating S1P receptors with a pharmacological agent (FTY720/fingolimod) or endogenously-produced S1P (preconditioning) protects the brain from ischemia-induced damage. Finally, Christian’s team has shown that administering fingolimod as late as 24 hours after reperfusion in a mouse model promotes long-term stroke recovery, and that fingolimod reduces the neurological deficit and infarct volume after in situ thrombo-embolic occlusion of the middle cerebral artery, a model likely to better mimic the features of stroke in humans; combination of fingolimod and tPA improved the neurological outcome of the thrombolytic therapy and reduces the risk of hemorrhagic transformation associated to delayed administration to tPA. Because fingolimod’s mechanism of action is thought to involve lymphocytes, Christian’s team is now characterizing the effect of  immune-modulating agents such as fingolimod on lymphocyte trafficking, with special emphasis on their effects on regulatory T cells (Tregs).Christian is also involved in clinical studies aimed at characterizing the profiles of various circulating immune cell populations in the hours and days following an acute ischemic stroke.  This will lead to a better understanding of the role of the immune system in stroke recovery.
‍

My research is centered on the role of sphingosine-1-phosphate (S1P) receptor stimulation in various pathological conditions. My team has shown that S1P receptors have a widespread distribution both in the adult and in the developing brain, in which S1P might play a key role, based on our finding that it induces proliferation and morphological changes of neural progenitor cells. We have also characterized the distribution of the S1P synthesizing enzyme, sphingosine kinase (SPK), in brain, shown that it is up-regulated in neurons following ischemia. Finally, we have shown that stimulating S1P receptors with a pharmacological agent (FTY720/fingolimod) or endogenously-produced S1P protects the brain from ischemia-induced damage. My current studies center on preconditioning and neuroprotection in the context of ischemic stroke and intracerebral haemorrhage, and aim at better understanding the role of the adaptive immune system in stroke outcome.
1.    Preconditioning (in which a stimulus below the threshold of damage is applied, leading to tissue resistance to the same, or different stimuli given beyond damage threshold) is an attractive experimental strategy to identify endogenous protective mechanisms that could be therapeutically implemented. The lipid mediator sphingosine 1-phosphate (S1P) plays a role in preconditioning, protecting the heart and kidney against ischemia/reperfusion injury. Sphingosine kinase 2 (SK2) is the major S1P-synthezising enzyme in brain and is up-regulated in neurons in response to ischemia. SK2 is a BH3-only protein, that can interact with the cell death-related protein Bcl-xL, suggesting that this enzyme isoform has S1P-independent actions. Together with colleagues at Soochow University, we have shown that TAT-SPK2 peptide protects against cerebral ischemia/reperfusion neuronal injury both in vivo and in vitro. TAT-SPK2 directly binds to Bcl-2 and disrupts the Beclin-1/Bcl-2 complex and BNIP3/Bcl-2 complex to induce mitophagy. TAT-SPK2 peptide may become a potential candidate for the treatment of ischemic stroke.
2.    Neuroprotection The only specific drug available for the management of stroke, recombinant tissue plasminogen activator (tPA), can only be used in a small minority of patients. Thus, the need for an effective and easily administered treatment remains paramount. We have shown that the sphingosine 1-phosphate modulator fingolimod is effective in various animal models of ischemic stroke. Based on these findings, we received Health Research Board funding for  preclinical study aimed at establishing the potential of fingolimod as an acute stroke therapeutic agent. Specifically, our goal was to determine the optimal fingolimod administration protocol by examining dose-response, optimal duration of treatment and dosing paradigm.S Our second gola was to confirm the efficacy of fingolimod under clinically relevant circumstances (aged animals and animals with common co-morbid states - hypertension, type II diabetes and hyperlipidemia). Surprisingly, these studies failed to show a consistent effect of fingolimod. Our group is currently examining possible causes for the different outcome in these and previous studies. Using flow cytometry studies, we are also characterizing the profile of various immune cells populations in animals models (following treatment with various immunomodulators) or in stroke patients. We hypothesize that a better understanding of the role of the adaptive immune system in stroke, in particular that of regulatory T cells (Tregs), will lead to interventions that will improve patient outcome.      ‍ 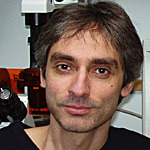