Since March 2017 he joined UCC as lecturer in Inorganic Chemistry.

At present I am lecturing the following modules: 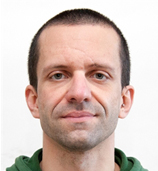