In 1992, Dr. Alan P. Morrison graduated with first class honours in Electrical Engineering and Microelectronics from University College Cork (UCC). He was awarded the Ph.D. degree of the National University of Ireland in 1997. From 1996 until 1998 he was responsible for Silicon Optoelectronics Research within the Technology Characterisation and Modelling Group at the National Microelectronics Research Centre (NMRC) (now the Tyndall National Institute). He joined the Electrical and Electronic Engineering Department at UCC in 1998 as a Lecturer and was promoted to Senior Lecturer in 2006. In 2008, he became an Academic Member of the Photonics Centre at the Tyndall National Institute. In 2012 he was elected Dean of Engineering, a post held for two terms to September 2018. Dr Morrison's work is internationally recognised in the field of photodetection and imaging. He is currently working on the design and development of intelligent lighting for applications in horticulture in collaboration with colleagues in the School of BEES at UCC. His other research interests include the design and development of novel Geiger-mode avalanche photodiodes (GM-APDs) and avalanche photodiodes (APDs) for single photon counting and low-light imaging applications. He has also been working on the development of next generation multijunction solar-cells for concentrated photovoltaic (CPV) applications and PV system design. He is a Senior Member of the IEEE, a member of the IEEE Photonics Society and a life member of the IEEE Electron Devices Society. He is a Science Foundation Ireland Principal Investigator and is the author/co-author of more than 130 scientific publications in peer reviewed international journals and conference proceedings.‍

My research programme currently encompasses three main themes: (i) Multi-spectral LED lighting (ii) Optical Detection (iii) Photovoltaic Energy Systems and Storage. We have also conducted a productive period of research investigating Nanopores for DNA analysis applications. (i) Multi-spectral LED lighting: As a Science Foundation Principal Investigator I am currently collaborating with Prof. Marcel Jansen from the School of BEES at UCC to develop intelligent low-energy lighting systems for cropping applications. I am working towards real-time spectrally tunable LED lamps incorporating controlled UV dose and investigating the impact this has on plant growth and performance.  (ii) Optical Detection: Since 1996 I have been working on the development of high sensitivity avalanche photodiodes for photon counting applications, such as LIDAR, High Time Resolution Astrophysics, Laser Scanning Microscopy, Fluorescence Correlation Spectroscopy, Medical Imaging and Time Correlated Single Photon Counting, to name but a few. Over the years my research group has developed an international reputation in the field of Single Photon Avalanche Detectors (SPADs) or Geiger-mode APDs, as they are also known. This work has been supported through EU grants (MICROSPAD); an SFI Principal Investigator award (PhoCUS) and more recently via the SFI Strategic Research Cluster (PiFAS). We have  developed Silicon based avalanche photodiodes and single photon detectors that had world leading properties in terms of noise performance and sensitivity across the visible spectrum. We developed integrated arrays of APDs for low-resolution imaging Semiconductor optoelectronic devices and completed the development of several application specific integrated circuits to control the operation of these sophisticated detectors. Recently we have been working on extending the wavelength into the near infrared. This involves developing processes to include germanium on silicon. We investigated both monolithic growth techniques as well as direct wafer bonding. We have successfully made photodetectors operating at wavelengths as long as 1.5 µm. This work has been carried out in collaboration with the Tyndall National Institute.(iii) Photovoltaic Energy Systems and Storage: In the energy space our work focuses on the development of novel solar cells as well as the associated systems required to make the cells operate. We are developing high efficiency multi-junction solar cells using two different approaches. The first approach involves the monolithic growth of different solar cells on top of each other with each solar cell being sensitive to a different portion of the sun's radiation. The other approach is to use a mechanical stack of solar cells each optimised for different portion of the sun's spectrum. These high-efficiency solar cells operate under concentrated sunlight, which necessitates the use of focusing optics such as lenses or mirrors to capture the sun's radiation. We have completed a full scale demonstrator of a concentrator photovoltaic system. This system includes a two axis tracker; custom designed optical modules; on panel monitoring of environmental conditions; maximum PowerPoint tracker with charge controller and a lead acid battery storage system.Energy storage forms a key component of any energy system. In my research I am particularly interested in battery storage systems. The main technologies of interest include lithium ion and lead acid batteries. I am interested in different charging strategies, extending battery life time, measuring the current state of charge, and balancing charge between cells.
Dormant research:
Nanopores: In my group we have used track etched nano pores in an electrochemical cell to investigate the structure of DNA as it passes through the pore. We have developed a variety of techniques to etch the nanopore, including an automated system for pore production. We have also developed an extremely low noise current amplifier to measure the modulation in the electrochemical current as the DNA sample passes through the pore. We have been involved in several collaborative projects to investigate the physics of these nano pores. 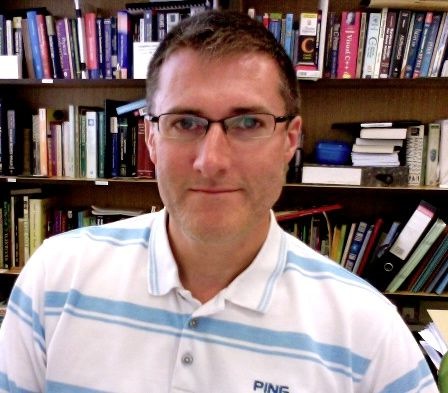 School of Engineering and Architecture