Caitriona O'Driscoll is Professor and Chair of Pharmaceutics in the School of Pharmacy, University College Cork, Ireland.
Total Career Publications: 117.  Google Scholar H-Index: 39, citations 4683; Scopus H-Index: 34, citations 3497.
Total Career Research Income: Euro 5.5M. PhDs Graduated (Career): 23 PhDs
She received a B.Sc. in Pharmacy from University College Dublin in 1976 and a PhD in 1983 from the University of Dublin, Trinity College. In 1977 she joined the faculty of the School of Pharmacy in Trinity College and held the posts of lecturer (1977-1994) and senior lecturer (1995-2003) in Pharmaceutics during which time she undertook a sabbatical in the Department of Pharmaceutical Chemistry at the University of Kansas. In 2003 she was appointed as Professor of Pharmaceutics at UCC and was, at the same time, appointed as the first Head of the School of Pharmacy at UCC, she served as Head from 2003-09 and 2010-13.During her tenure as Professor of Pharmaceutics she has established an energetic, productive and expanding drug delivery research team. The expertise established spans from pre-formulation through to production and manufacture of prototype delivery systems suitable for clinical trial. The group has obtained funding from exchequer and non-exchequer sources and offers a range of PhD positions. Strong links to the Pharmaceutical Industry underpin many of the research projects. The establishment within UCC of the drug delivery group and the development of interactions with Pharmaceutical Chemistry and Process & Chemical Engineering at UCC gives the University a unique strength which facilitates drug development research from drug design and synthesis all the way through formulation and production to clinical trial. Professor O'Driscoll has published peer-reviewed research articles in key pharmaceutical journals, including Journal of Controlled Release, Molecular Pharmaceutics, and Pharmaceutical Research. She has been invited to give lectures at various international conferences and institutions worldwide and is a member of the Editorial Advisory Board for several journals including European Journal of Pharmaceutical Sciences, Journal of Pharmaceutical Sciences, Journal of Pharmacy and Pharmacology, Journal of Drug Delivery, Science and Technology and Pharmaceutical Nanotechnology.Professor O'Driscoll is an external examiner for University of Bath, Masters in Pharmacy and for the Pharmaceutical Society of Ireland, Professional Registration examination. She has acted as PhD thesis examiner in University of Nottingham, University of London, King's College London, University of Bath, University of Strathclyde, Cardiff University, Queen's University Belfast, Monash University Melbourne and Trinity College Dublin. She is serving as a member of the Irish Medicine Board (2011-2014) and the Pharmaceutical Society of Ireland (2011-2014) and is a member of the College of Medicine and Health Executive UCC and the School of Pharmacy Executive. Professor O'Driscoll was awarded the 'Person of the Year award' for outstanding contribution to science by the Parenteral Drug Association (Ireland Chapter) in 2013 and in 2007/2008 was honoured with the 'Award for Professional Excellence' and 'Award for Pharmacist of the Year' by Helix Health.Professor O'Driscoll is a Board member of: the Health Products Regulatory Authority (HPRA) (2011-20) Council Member of the Pharmaceutical Society of Ireland (PSI) (2011-15);  Cork Cancer Research Centre (CCRC) (2014-17); Critical Path USA (2018-date) and Co-founder and Co-Chair of Regulatory Science
Ireland (RSI) (2014-19).
‍

Professor O’Driscoll’s research strategy is translational in nature and product driven. The theme of the research is drug delivery with an emphasis on `problem’ or difficult drugs e.g. poorly water soluble compounds, and, products of the pharmaceutical biotechnology industry including peptide/protein type drugs, plasma DNA and siRNA. These candidate drugs are chosen for strategic reasons. Greater than 40% of new chemical entities currently synthesised as potential drugs are poorly water soluble and consequently are difficult to formulate for efficient delivery. In recent years significant growth has occurred in the pharmaceutical biotechnology industry in Ireland and internationally. Biopharmaceuticals, including peptide/proteins, genes and siRNA, are now approaching 50% of all new drugs in development. It is well accepted that the major barrier to marketing these product as novel therapeutics is the design of efficient delivery systems. The focus has been to develop nano-sized delivery constructs which are robust enough to survive processing, are stable on storage and achieve cell /site specific delivery in vivo. Such targeted systems aim to increase therapeutic efficacy and reduce side effects or off target effects. In general the work includes a focus on oral drug delivery, while this is often the most challenging route of administration; it is the most acceptable route for the patient and consequently the most commercially viable.

Prof. O'Driscoll currently teaches various aspects of Pharmaceutics to all levels of under-graduate B. Pharmacy students including PF1012, PF3008, PF4109.At postgraduate level she teaches modules in the MSc Biotechnology and MSc Pharmaceutical Technology and Quality Systems 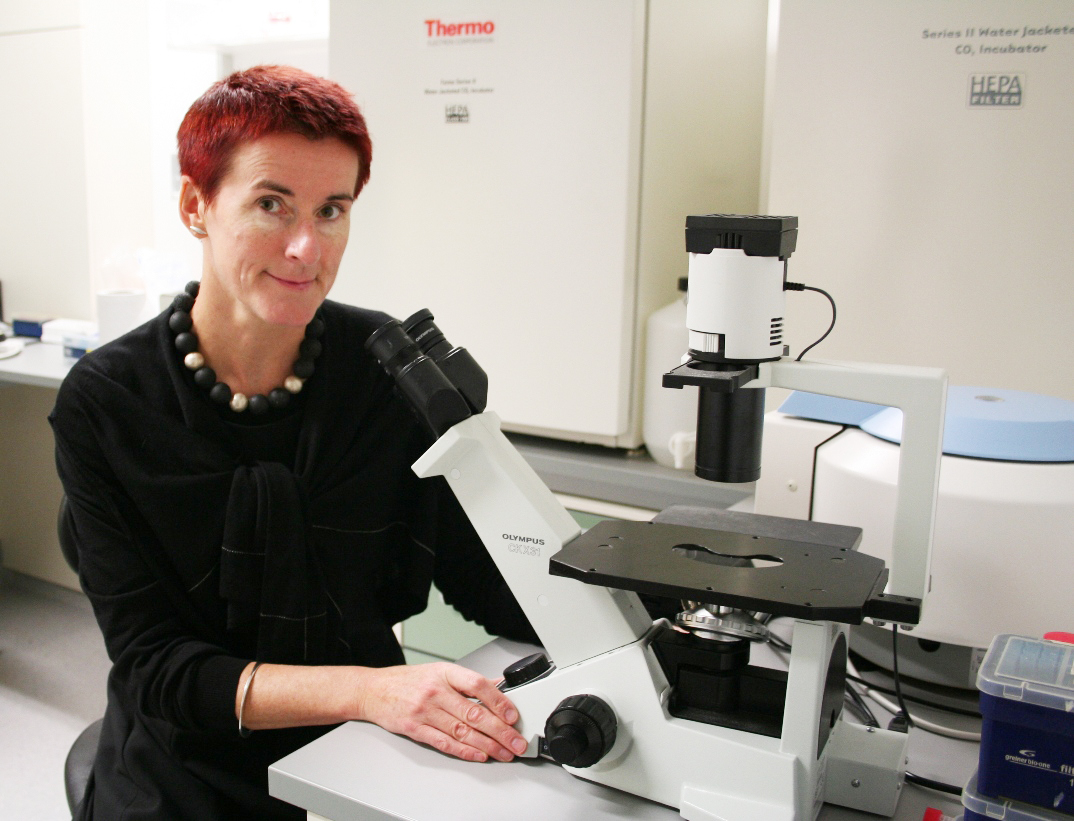