Yvonne Nolan is a Senior Lecturer, Funded Investigator in APC Microbiome Ireland and a Science Foundation Ireland Investigator. She leads a research team investigating the impact of inflammation and modifiable lifestyle factors such as exercise, stress, diet and music on brain plasticity, mental health and memory throughout the lifespan. Yvonne graduated from NUI, Galway with a BSc (Hons) in Biochemistry (1996), and a PhD in Neuropharmacology (1999).  She was a visiting scholar at McGill University Montreal, Canada (1998) and held postdoctoral positions in Trinity College, Dublin (1999 – 2003).  In 2003 she was appointed as Lecturer in the Department of Anatomy and Neuroscience, UCC and in 2011 she was promoted to Senior Lecturer.

Research in Dr. Nolan's laboratory focuses on the effects of inflammation, exercise, stress and diet on hippocampal plasticity and neurogenesis (the birth of new neurons) and on associated learning, memory and mood throughout the lifespan. She has supervised 6 postdoctoral researchers, 13 PhD students, 6 MSc (research) students and numerous visiting and undergraduate students. She was awarded UCC’s Research Supervisor of the Year Award, 2016. She has certification in Research Team Leadership from the Leadership Foundation for Higher Education. She has a number of collaborations with academic and industrial partners and her team have had recognition for research in the form of prizes, image exhibition and media coverage. Her H-index is 32 (ISI Web of ScienceTM) and her work has been cited >4000 times. She has secured >€3.5M in research funding as Lead Investigator from Science Foundation Ireland, Marigot Ireland Ltd, Molecular Medicine Ireland, Irish Research Council and Vasogen Inc., Canada. She is consortium lead on a European Centres of Excellence in Neurodegeneration (COEN) project.

Yvonne was Director of the BSc in Neuroscience in UCC from 2015-2020 in which she promoted collegiality, teamwork and engagement. Since her appointment in 2003, she has taught Anatomy and Neuroscience to students in Occupational, Speech and Language Therapy, Neuroscience, Medical, Dental, Pharmacy, Osteoarchaeology and Audiology programmes. In 2006 she was awarded a Postgraduate Certificate in Teaching and Learning in Higher Education (UCC), and in 2008 she received a National Academy award for the Integration of Research and Teaching and Learning. She is currently part of an interdisciplinary team who are funded to create a Digital Badge to enable staff to tailor curricula for the enhanced learning and wellbeing of students. She provides both informal and formal mentoring to students and staff and was a role model on the Aurora leadership programme for women in Higher Education.
Yvonne contributes to the scientific and wider community through research projects with Down Syndrome Cork and industrial partners, and talks to schoolchildren, parents and teachers on child and adolescent brain health. She has organised conferences, symposia and public events including a symposium on the "Hippocampus in Health and Disease" in 2014 with guest speaker Nobel Laureate John O'Keefe, and “Brain Connections”, a public event on dementia and Parkinson’s in 2018 and 2020. She is a judge for the Irish Laboratory Awards and sits on the Independent Advisory Board for the Wellcome/HRB Irish Clinical Academic Training (ICAT) programme. She is a member of Society for Neuroscience, Psychoneuroimmunology Research Society, and Neuroscience Ireland.‍

Research in Dr. Nolan’s group is focused on understanding how lifestyle factors such as exercise, stress, diet and music throughout the life course impact upon neuronal functions and behaviour, with a focus on inflammation as a critical mediator.  We work on the role of the gut microbiome and hippocampal neurogenesis (the birth of new neurons) in mediating these environmental influences on the brain and behaviour.  Concurrently, an awareness of modifiable lifestyle factors (exercise, diet, music) for brain health is promoted.

The inter-related aims of Dr. Nolan’s research programme are:
1. To understand the mechanisms underpinning the interplay between chronic neuroinflammation and exercise on hippocampal neurogenesis (a form of brain plasticity involving the production of new neurons from stem cells) and behaviour (memory and mood) during sensitive periods of the lifespan, specifically adolescence and older age
2. To interrogate the role of the gut microbiota in Alzheimer’s disease and in exercise-induced changes in inflammation, brain plasticity and behaviour in ageing
3. To identify the inflammatory mechanisms underlying the negative effects of a cafeteria diet on brain and behaviour and to investigate exercise as a mitigating strategy
4. To increase understanding of learning strategies, academic motivation, well-being, and anxiety linked with inflammation in adolescent undergraduate students in UCC
5. To investigate musical training on cognition and sociability in children with Down Syndrome

Leadership in Neuroscience: Dr. Nolan was Director of the BSc Neuroscience (2015-2020) and co-ordinates (currently/past five years) seven neuroscience modules (AN2020; AN3001; AN4011; AN4013; AN4014; AN4015; AN6031).She established a staff-student liaison committee, peer mentoring, career advisory sessions, Student Declaration and Code of Conduct, Work placement module, alumni talks, information video, Twitter handle and programme email address for prospective students. She also co-ordinated the Intercalated BSc in Neuroscience for Medical students. Leadership in Anatomy: Dr. Nolan has developed curriculum, taught and assessed Anatomy to students in Occupational, Speech and Language Therapy, Medicine, Dentistry, Pharmacy, and to postgraduate students in Anatomy, Osteoarchaeology and Audiology since her appointment in 2003. She was Anatomy liaison for School of Clinical Therapies (2004–2016). She has represented the department at School and Exam Boards and in the accreditation and re-accreditation of both Occupational Therapy and Speech and Language Therapy programmes since 2006. She co-ordinates/previously co-ordinated six anatomy modules (AN1060; AN1061; AN1074; AN3005; AN3006; AN6001).
Research-led teaching: Dr. Nolan draws on her expertise in cognitive function, inflammation and lifestyle factors influencing the brain in her teaching. She leads an active research group in Neuroscience and impart her expertise in three research-based modules (AN4011, AN4013, AN4014) which she coordinates. She has supervised 6 taught MSc dissertation students, >50 undergraduate projects, >60 library projects and seven ERASMUS projects (Grenoble, Beijing, Amsterdam, Toulouse).Teaching Qualification:
Teaching Awards/Grants:Curriculum Committee Membership:Chair of BSc Neuroscience curriculum committee (2016-present)College of SEFS Academic Programmes and Curriculum Development Committee (2016 - 2020)College of SEFS Board of Studies for Biological and Chemical Science degree (2016 - 2020)    School of Medicine Research and Postgraduate Affairs Committee, UCC (2012–present)Continuing Professional Development Steering Group, College of Medicine & Health (2015-2018)School of Medicine Curriculum Committee (2012–2014)
Departmental Representative on the Clinical Therapies School Board (2003-2017)
Chair of Departmental Anatomy Curriculum Committee (2012-2014)
Chair of Departmental Graduate Studies Committee (2008-2013) 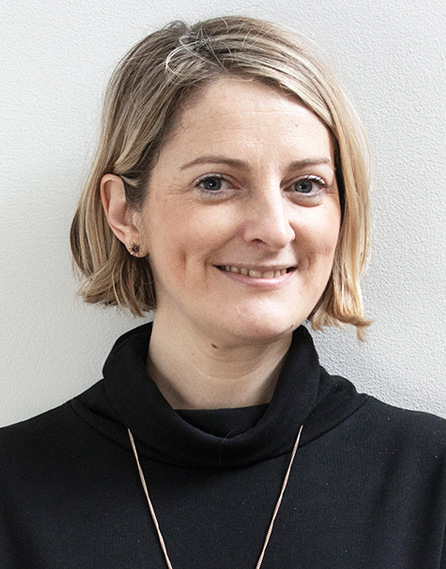