His research interests are in the understanding of the organic solid state where he leads a group investigating issues such as crystal engineering, crystallisation, polymorphism, co-crystallisation and crystal growth . He is a member of the Analytical and Biological Chemistry Research Facility (ABCRF http://www.ucc.ie/en/abcrf/) and the Synthesis and Solid State Pharmaceutical Centre (SSPC http://www.sspc.ie/), a large scale collaboration involving both industry and academia which is funded by Science Foundation Ireland, and for which he is responsible for the projects investigating co-crystallization. He has been elected Chair of the COST Action CM4102 "From molecules to crystals - how do organic molecules form crystals? (Crystallize)" which runs from 2015 -2018. He has 76 publications with an h-factor of 16. Grant income for the 2008-14 period is €2.1M (SFI €1.3M, EU €0.5M, IRC €0.24M) and total grant income over career is €2.6M.

My research interests are in understanding and controlling the organic solid state, encompassing crystal engineering, co-crystallization, polymorphism and nucleation itself.

New synthons for crystal engineering Understanding the intermolecular interactions that occur between molecules is vital for the design of new materials and with specific purpose. Investigation into functional groups that have received little attention is of increasing importance as the pharmaceutical industry looks to new classes of compounds, which often display suitable activity but poor attributes for commercial success. The interplay between weak and strong intermolecular interactions, and between hydrogen and halogen bonding, is Increasingly of importance. Our research is particularly focussed on sulfur functional groups.

Co-crystallization is one strategy that can be important to overcome problems with drug molecules that display poor physicochemical properties. This involves crystallizing two or more molecules together to form a new crystalline entity. The molecules can both be neutral molecules, although recently interest has also focussed on the development and properties of ionic cocrystals.

Solution Structure and Nucleation are the processes from which crystalline materials form. Understanding these processes is a complex task, although recent developments in both experimental and computational techniques are allowing access to these phenomena.

Current projects are investigating the co-crystallization of nutraceuticals, the use of cocrystals for chiral resolution and the structure of the solution phase and nucleation.

The COST Action CM1402 on "From molecules to crystals - how do organic molecules form crystals? (Crystallize)" brings together scientists from Europe (and beyond) to examine the solution phase, nucleation, and crystal growth during the crystallization process and to use this knowledge in applied situations. This is open to any interested parties in both academia and industry. 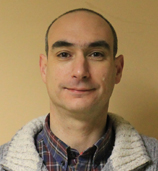